Cost of homelessness in Hackney doubles since 2010 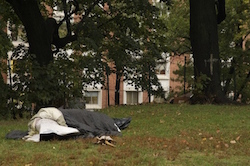 Since 2010, policies brought in by coalition and conservative governments have cut jobseekers allowance, housing benefits and increased sanctions for people receiving support.

Hackney Green Party spokesperson, Charlotte George, said: “Homelessness is one of the starkest ways we can see how the housing crisis and austerity are affecting people in Hackney. Local residents are in a lose-lose situation with the cost of housing skyrocketing and their options for support diminishing.”

The end of a private rented tenancy is the leading cause of homelessness in the UK. Just under one in three people become homeless follow the loss of their private rented home[1]. In London, work by the Green Party has shown two in five people become homeless for this reason[2]. Homelessness in London has gone up 16% in the past year and 55% since 2010[3].

Charlotte George added: “The Green Party would tackle homelessness by building more social housing, bringing empty housing back into use, and providing greater security and rent controls for tenants. We need to help those who fall into homelessness and illness.”

The 2015 Green Party manifesto states: “(We will) Provide more rights for homeless people, giving local authorities the same duties with regard to single people and childless couples as to families, and ending the practice of declaring people "intentionally homeless. Aim to end rough sleeping completely and give public authorities a duty to prevent it.”