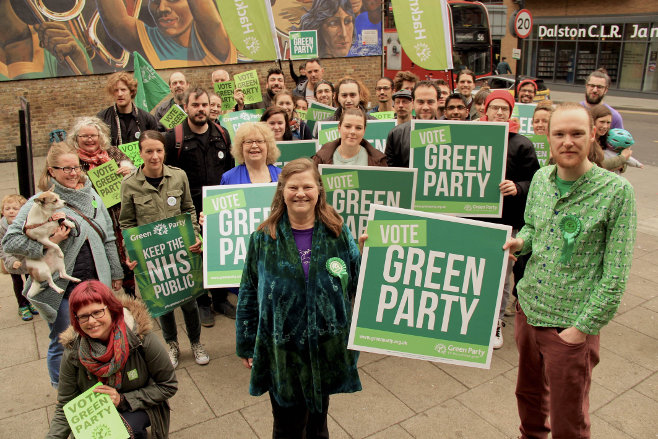 The Greens’ election campaign will focus on standing up to a political establishment which many voters let down by. This establishment includes all three of the main parties.

The Greens will demonstrate that only the they offer truly modernising policies to create a more equal education system, the radical changes needed to improve our democracy, and forward-thinking energy policies for a sustainable future.

They plan to challenge not only the Tories, but both Labour, for their support of the hard Brexit and their lack of support for democratic reform, and the Liberal Democrats over their complicity in the devastating cuts made by the former coalition government that have effected many in Hackney.

At the launch yesterday Green candidates Alastair Binnie-Lubbock and Rebecca Johnson, as well as Jean Lambert MEP, addressed the crowd gathered below the anti-nuclear weapons mural near the Dalston Curve garden. Hackney Greens have been campaigning to save the Curve Garden from re-development.

“Labour do not have the monopoly on good ideas, and this two-party system does not reflect the reality of opinion any more. And they need to be challenged: by voting Article 50 Diane Abbot has handed the Tories a blank cheque for their extreme Brexit.

He also highlighted the fact that Labour-dominate Hackney Council has only committed to divest 50% of it’s investments from fossil fuels:

“A similar lack of commitment by councils and other bodies around the country, as well as the Tory government’s dire lack of action on climate change will leave the UK unable to meet carbon emissions targets agreed in Paris, something which does not seem to trouble any of the other parties in this election.”

“I moved here 27 years ago, when people warned me about moving to Dalston. We have seen a lot changes. Of course some were for the better. It’s safer now, but gentrification has also seen new flats, such as opposite the Peace Mural, go up, the prices of which are way beyond the means of most people in Hackney. I’m standing in Hackney South and Shoreditch because I want Hackney to be a place that is welcoming, open and affordable for everybody, from those who have lived here all their lives, to those coming into the borough with new industries and ideas.”

She also highlighted the need to protect Hackney’s schools:

“In our current system, disadvantage sets in from early years so we want to create a more equal education system from the very start and promote education for life.”

Jean Lambert praised other Greens around the country who are forming alliances with other parties to support candidates who have stood up to the Tories hard Brexit, and stressed the need to reform our voting system which was made in the nineteenth century and is no longer fit for the twenty first.