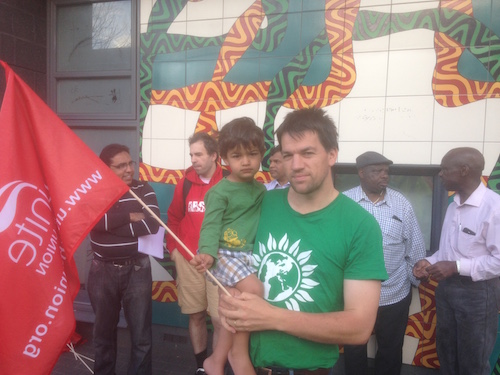 When the traffic enforcement contract for Hackney was outsourced to multinational corporation Acpoa four years ago, the standard sick pay scheme for council employees was scrapped in favour of the minimum statutory sick pay.

Over the past years workers, invariably living on a tight budget with young families to support, have had to suffer economic hardship when sickness forced them to take time off work. Employees had repeatedly asked the company to adopt a more dignified sick pay scheme but managers had repeatedly avoided negotiations on the issue. Out of frustration and desperation workers signed up to Unite the union who sent local officer Onay Kasab to assist them.

“We sat down with management and clearly explained our grievances but they kept on kicking the issue into the long grass” explained Mr Kasab. “We balloted 30 of our members and got nine responses: all in favour of taking strike action”

“It’s interesting though, because a lot more than nine people are here on the picket line today” he continued, counting more than 20 striking workers who had gathered outside the company office on Mare Street the first morning of the strike. He was clearly making reference to the proposed government legislation, which would have deemed this strike illegal because of the low response in the ballot.

Workers were all on strike for the first time in their lives and were clearly nervous – there was palpable tension in the air as managers and non-striking workers arrived for the morning shift. But workers were adamant that withholding their labour was the necessary course of action after the injustice they had faced for so long and the inability to negotiate a better deal.

Attending the picket line, Hackney Green Party member Alex Armitage said “The refusal to adopt a decent sick pay policy clearly demonstrates an untrusting assumption on behalf of the company that workers would abuse sick leave. The real effect of their behaviour is to push more families in London into poverty.”

The Green Party stands for decent pay and fair working conditions for all people. We want to see an end to the outsourcing of public services to private companies – this is yet another example of how public money gets siphoned off for company bosses whist workers’ situations become even more vulnerable.