Speaking Out Against Nuclear Warheads

In March 2021 the Government said it would increase the number of UK warheads. The response from many people was to ask: ‘what’s the point?’. Nuclear warheads are unusable and also immoral. In January 2021 a UN Treaty banning nuclear weapons came into force.

UK nuclear warheads are made just west of Reading in Aldermaston in Berkshire. The site is being closely monitored by the regulators due to safety problems – it is a catastrophe waiting to happen.

The costs of replacing Trident are already estimated at around £205 Billion – that’s £205 Billion. Legally we should be getting rid of our nuclear weapons and the Campaign for Nuclear Disarmament (CND) surveys show that’s what people want.

They are no help against the real threats – climate crisis and pandemics – that we face, it’s time to call a halt. The Green Party is the only main party that stands for a clean Green future and against the danger and horror of nuclear weapons.

We are planning a day of action on the Anniversary of Chernobyl which is Monday 26th April and we need your help.

... take a photo next to your local place sign (Road, Village, Town, Borough)

And on Monday April 26th, the Anniversary of Chernobyl, post it on Social Media with the #stoptrident hashtag. 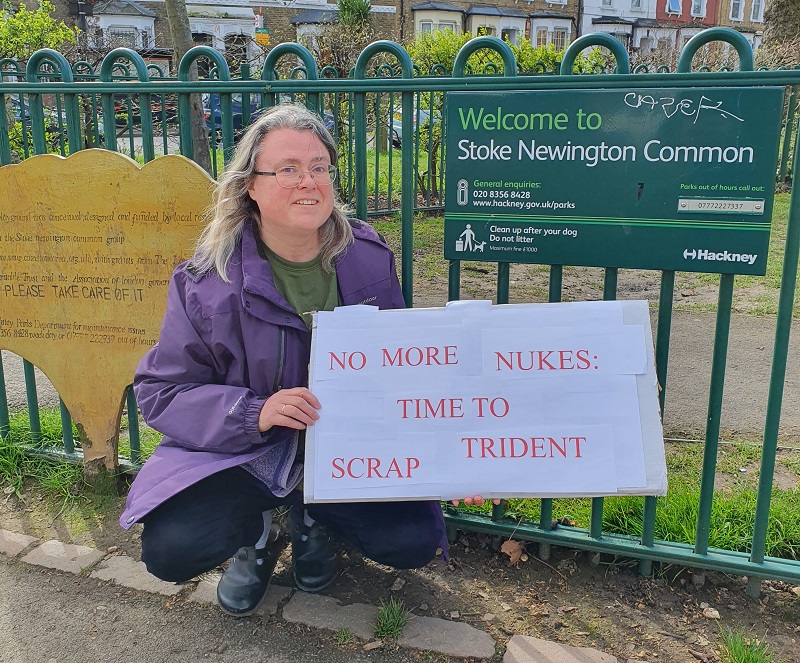 + Email your Member of Parliament (MP)

Ask your MP to build the world we want, free from the fear of nuclear annihilation and end the wasted resources. Ask them to end our Trident programme now.

You can find your MP here (https://members.parliament.uk/FindYourMP)

The U.N. Treaty on the Prohibition of Nuclear Weapons
https://www.icanw.org/the_treaty

Cap on Trident nuclear warhead stockpile to rise by more than 40%
https://www.theguardian.com/uk-news/2021/mar/15/cap-on-trident-nuclear-warhead-stockpile-to-rise-by-more-than-40