Statement in Support of Strike Action

Hackney Green Party Councillors Issue Statement in Support of Strike Action: “There are no services without people.”

This week, workers on the UK’s railways are taking industrial action to demand a decent pay rise, job security, and no compulsory redundancies.

Today, Hackney Green Councillors have expressed their “total support” for this action. 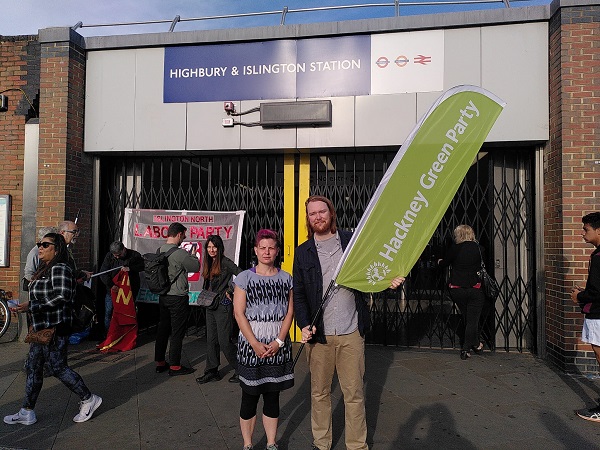 Rail workers employed by Network Rail and dozens of Train Operating Companies will walk out to demand a fair pay offer and guarantees that jobs will not be cut.

The RPI rate of inflation approaches 11.1%, meaning prices and bills are rising faster than wages and real-terms pay is falling. The RMT trade union has accused the Government and employers of threatening thousands of job cuts and failing to offer a pay rise in line with rising prices.

“Safe workplaces, secure jobs and pay you can really live on should be a minimum standard of employment. These are workers who could not work from home during lockdowns.

“The Government and railway employers have not offered rail workers a decent pay rise or job security. Instead, they have given 50,000 rail workers no choice but to take strike action, and we totally support the RMT trade union in taking that step.

“The Government has caused this mess and they must take responsibility. Passengers and workers both want a successful rail network in public ownership and underpinned by good jobs. This action is avoidable if government sits down with rail unions and negotiates a fair settlement to protect jobs and workers’ pay from inflation.”

“The right to get organised and take strike action with colleagues is a hard-won and fundamental one. This is an attack on every person who works for a living and we stand against it. This action has the overwhelming endorsement of railway workers and when we think that unions gave us a 5 day week the real question is what needs to be done to get more workers to stand up for their rights.

“I have joined picket lines and marched with fellow trade unionists and will do again. As Councillors, we have met the local Unite branch as a priority and continue to try and meet senior Council staff and politicians to support negotiations here in Hackney. We will always support workers because there are no services without people.”