Member's Voice: What happens at a Green Party conference?

The 2015 Green Party Autumn Conference was held in Bournemouth - and no-one could ask for a better spot or more perfect weather! The local party put up a marquee on the beach, the sun shone down on us and some particularly brave locals were even swimming.

Our Hackney co-ordinators, Samir and Charlotte, tried to, as their job title suggests, co-ordinate which events to go to. Check out their diary of a conference attendee... 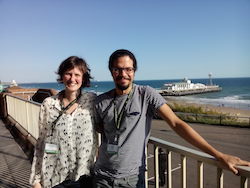 Samir attended on the first day which featured the opening speech by Natalie Bennett where she focused on austerity, climate change and the build up to the Paris talks. It's also the day where the Party does most of its administration, noting reports from the Executive and other bodies of the Party. In the evening, Samir had organised a screening of Rashid Nix's film 'Why Don't Black People Vote.'

Saturday morning, Samir attended a fringe on the campaigns run in the South West, which resulted in a Green MEP in 2014 and second place in Bristol West in 2015, as well as a string of council seats.

After tackling a rail replacement bus from Southampton, Charlotte arrived in time to see the end of the Deputy Leaders, Amelia Womack and Shahrar Ali, speak.

After lunch/catch ups/networking, Charlotte attended a session on education in the UK, sponsored by the National Union of Teachers and featuring speakers from the NUT and Save Childhood along with Natalie Bennet.

The stats about increases in depression among children were frightening - as are figures about how hard it is to attract and retain good teachers. The focus on the “exam factory” was cited by all the speakers as a huge problem and there was good discussion about the “Finnish model” and Green Party education policies.

Samir went to the panel on 'Pale, Male and Stale', which was about selecting and promoting candidates from a broader range of backgrounds. The challenge to the Green Party was recognised in our poor diversity in terms of race at the 2015 elections and in electable positions in the London Assembly elections.

Saturday afternoon Charlotte went to a session on Alternative Media, panel included writers from Morning Star, Open Democracy, Bright Green and Novara Media. The latter, Aaron Bastani, was a particularly compelling speaker and encouraged all attendees to create their own media wherever possible, with a particular focus on video.

Samir went to a fringe on Prevent, the UK's controversial anti-extremism policy. This is a particular challenge to councillors and school governors, who face schools being failed by OFSTED if they do not comply. However, there have been a string of cases where it has been shown that the policy has been narrowly applied to Muslim people, and particularly children – creating an environment which promotes exclusion.

And after all this hard work on Saturday night Charlotte ate Thai, Samir went clubbing.

Sunday morning, bright and early, Charlotte managed to get to a 9am session, which was a report from the Green MEPs, Jean Lambert and Molly Scott-Cato. Not only are the MEPs interesting and inspiring, they are always working on such a variety of issues and with such diverse people, but they served the best pastries EVER! So fresh. And as they were Danishes they were also thematically relevant.

Caroline Lucas’ speech was, unsurprisingly, brilliant and uplifting. She spoke of working with the other parties on important issues, not just the new Corbyn Labour and the creation of a progressive alliance, but she also pointed out Tory MPs who have been fighting for privacy laws and against fracking, as well as our strange bedfellow in Electoral Reform, UKIP’s Douglas Carswell.

Caroline was followed by Sian Berry, the new London Mayoral candidate, who excelled and brought the audience to their feet. She spoke of running a campaign for Londoners; making sure the other parties listened to what ordinary people have to say.

Samir went to a session run by the West Midlands Green Party on how to run local party meetings that people want to go to. There were lots of ideas, and he's going to do a presentation to the next meeting on how we can make this happen in Hackney.

Charlotte’s final session was with Adam McGibbon, who was Caroline Lucas’ campaign manager and ran an excellent session on how hard they worked to get her re-elected. It wasn’t easy, with fierce opposition from Labour and some scary polls early in the year. But the effort and energy of the Greens pushed them through and we are very lucky that Adam will now be running the London campaign in 2016.

Monday saw the remaining motions and business taken, including new policy on abortion rights. Samir went to the session on the new Equality and Diversity policy that the party is developing.

And that was it!

From everyone at Hackney Green Party thanks for taking the time to attend and reporting back for us!